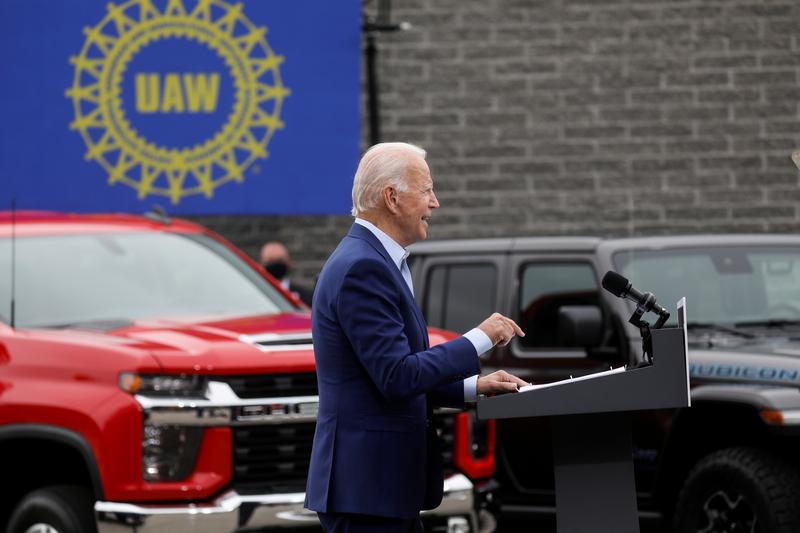 Biden and U.S. President Donald Trump both need the votes of auto workers in Midwestern swing states such as Michigan and Ohio, and both say they want automakers to create more auto jobs in the United States, rather than Mexico or China.

From there, Trump’s and Biden’s policies for autos and transportation diverge, presenting automakers with very different sets of risks and rewards.

If elected, Biden is expected to quickly reinstate the legal basis for California’s zero-emission vehicle rules and begin the process of reversing the Trump administration’s decision to ease fuel efficiency and carbon emission requirements through 2025. Automakers could also face sharply higher penalties for failing to meet fuel-efficiency requirements. The Trump administration rolled back those penalties, which the industry said saved at least $1 billion in annual compliance costs, but a federal appeals court in August reversed the administration action.

Days after Trump won the 2016 election, the trade group representing major automakers in Washington called on him to reconsider fuel-efficiency standards proposed by the outgoing Obama administration, and backed by California and other coastal states.

One question will be whether automakers who backed the Trump rollback continue their legal fight in the courts should he lose his re-election bid.

John Bozzella, who heads an auto industry trade group, said in a statement automakers are “committed to a cleaner, safer, smarter future and we understand the importance of working with all parties to achieve these goals.” Who constitutes “all parties” could change if Biden wins. Environmental groups and unions want more prominent roles in determining auto policy.

The automotive industry traditionally donates more to U.S. Republican lawmakers. And while 60% of automotive campaign contributions have flowed to Republican candidates in 2020, the gap has narrowed from 2018, according to the Center for Responsive Politics.

GM in 2019 drew the ire of Trump for its decision to close an Ohio car assembly plant as part of a larger plan to shut down four North American factories and cut 15,000 jobs. Trump eventually took credit for GM selling the plant to an electric pickup truck company and promising to invest $700 million in the battleground state.

On Tuesday, GM said it is investing $2 billion in six U.S. facilities and would build its new Cadillac electric SUV at its Spring Hill, Tennessee, assembly plant.

Dingell added if automakers made an emissions proposal it would be seen as a “floor” for negotiations, “so I think it’s got to come out from the environmentalist community and the unions working together.”

The United Auto Workers (UAW) union, representing more than 400,000 active members, in April reliably endorsed the presidential Democratic candidate. But nearly a third of UAW members defied their union’s recommendation in the 2016 election by voting for Trump.

UAW members are skeptical of open trade deals, and are concerned a shift to electric vehicles, combined with tougher emissions standards for the trucks and SUVs many of them build, will mean fewer jobs.

The UAW told Reuters that what is needed is “a transition to EV production that takes full advantage of economic opportunities and ensures that there are quality manufacturing jobs for tens of thousands of American workers that currently work on gas and diesel powered engines.”

California wants to ban all gasoline-powered passenger vehicles by 2035 and on Friday a New Jersey state environmental agency recommended the state ensure all passenger vehicles sold by 2035 are electric to meet emissions goals. Some lawmakers are considering tax credits to help convert some engine and other auto facilities into building electric vehicle components.

“Climate-friendly policies and a good economy are not at loggerheads,” said U.S. Representative Andy Levin, a Michigan Democrat whose district just north of Detroit is a presidential campaign battleground.

Trump has sought to capitalize on fears about electric vehicles. He has falsely said Biden backed a ban on gasoline-powered vehicles. Trump told Fox Business News in an interview last week that Democrats would “like to go one car per family and make it all electric.”

Democrats have not called for any limit on cars per family.

Reporting by David Shepardson in Washington and Tina Bellon in New York; Editing by Joseph White and Matthew Lewis