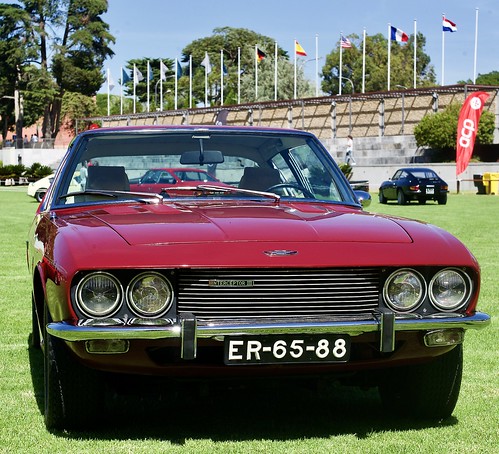 The Jensen Interceptor is a grand touring car which was hand-built at the Kelvin Way Factory in West Bromwich, near Birmingham in England, by Jensen Motors between 1966 and 1976.

The Interceptor name had been used previously by Jensen for the Jensen Interceptor made between 1950 and 1957 at the Carters Green factory.

Jensen had extensively used glass-reinforced plastic for the fabrication of body panels in the preceding two decades, but the new Interceptor saw a return to a steel body-shell.

The body was designed by an outside firm, Carrozzeria Touring of Italy, rather than the in-house staff. The early bodies were built in Italy by Vignale, before Jensen took production in house, making some subtle body modifications.

Jensen Motors used Chrysler V8 engines for the Interceptor, starting with the 6276 cc (383 c.i.) with optional manual (Mark I, only 22 built) or TorqueFlite automatic transmissions driving the rear wheels through a limited slip differential in a conventional Salisbury rear axle.

Only 232 cars were built with the 440 "Six Pack", and had the distinction of being the most powerful car ever to have been made by Jensen.

The Interceptor may have taken some styling cues from the Brasinca Uirapuru, with a distinctive large, curving wrap-around rear window that doubled as a tailgate.

Power steering was included as standard from September 1968.

The Mark II was announced in October 1969, with slightly revised styling around the headlamps, front grille and bumper and revised rear lights. The interior was substantially revised in order to meet US regulations, and air conditioning was an option.

The Mark III, introduced in 1971, revised the front grille, headlamp finishers and bumper treatment again. It had GKN alloy wheels and air conditioning as standard, and revised seats. It was divided into G-, H-, and J-series depending on the production year. The 6.3 litre 383ci engine was superseded by the 7.2 litre 440ci in 1971.

Jensen had fallen on hard times by 1975, owing to the then world-wide recession, and to problems with its Jensen-Healey sports car.

The company was placed into receivership, and the receivers allowed production to continue until the available cache of parts was exhausted.

Production of the Interceptor ended in 1976.

Later, a group of investors trading under the new Jensen Cars Limited brandname stepped in and relaunched production of the 1970s Interceptor, which was briefly re-introduced in the late 1980s as the Series 4 (S4) which was an updated version of the original Interceptor V8 series giving a new lifespan for the Jensen brand and its car production was resumed.

The car came back as a low-volume hand-built and bespoke affair, marketed in a similar way to Bristol, with a price of £70,000.

Though the body remained essentially the same as the last of the main production run of Series 3, the engine was a much smaller Chrysler-supplied 360 cubic inch (5.9 litre) which used more modern controls to reduce emissions comparatively and still producing about 250bhp. In addition, the interior was slightly re-designed with the addition of modern "sports" front seats as opposed to the armchair style of the earlier models, as well as a revised dashboard and electronics.

The then owner sold up in 1990 to an engineering company believed to be in a stronger position to manufacture the car; this lasted until 1993 with approximately 36 cars built, and while work commenced on development of a much modern Interceptor Series 5 (S5) for the 1990s unfortunately once again receivers were called in and the company was liquidated.