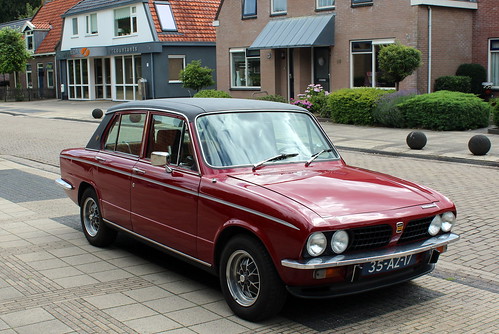 The Triumph Dolomite was a small saloon car produced by the Triumph Motor Company division of the British Leyland Corporation in Canley, Coventry between October 1972 and August 1980.

The Dolomite was the final addition to Triumph's small-car range (codenamed "Project Ajax"), which had started in 1965 with the Triumph 1300. Designed to be a replacement for the rear-wheel drive Triumph Herald, the 1300 was originally fitted with a 1,296 cc (79 cu in) engine and front-wheel drive. The later model, introduced in September 1970 as the Triumph 1500, featured a remodelled front and rear, styled by Michelotti, and a larger 1,493 cc (91 cu in) engine.

Triumph were however dissatisfied with the market performance of the 1300; although it had been moderately successful, the higher price and greater complexity meant sales never reached the levels of the simpler and cheaper Herald which preceded it.

Designed as the successor for the upmarket variants of front-wheel drive designs, and also to replace a sporting relative of the Herald, the six-cylinder Triumph Vitesse, the Triumph Dolomite was unveiled at the London Motor Show in October 1971. However, due to a number of strikes and other industrial upsets, the car was not reported to be in full production until October 1972. The Dolomite used the longer bodyshell of the front wheel drive Triumph 1500, but with the majority of the running gear carried over from the rear-wheel drive Triumph Toledo.

A team of engineers led by Spen King developed a 16-valve cylinder head with all of the valves being actuated using a single camshaft rather than the more conventional DOHC arrangement. The capacity was also increased to 1,998 cc (122 cu in), and combined with bigger carburettors the output was upped to 122 lb⋅ft (165 N⋅m) at 4,500 rpm and 127 bhp (95 kW) at 5,700 rpm. This represented a significant power increase over the smaller 1850cc variant. As a result of the use of this engine, the Dolomite Sprint has been claimed to be "the world's first mass-produced multi-valve car".

Production continued until August 1980 when BL closed the Canley Factory as part of a restructuring process which also resulted in the closure of the MG factory at Abingdon two months later.