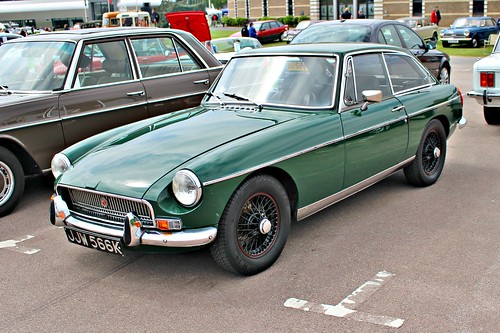 Launched in 1962, originally only as a Roadster, with the GT arriving in 1965, the B was constructed as a modern monocoque, as oposed to the body on frame construction of its predecessor the MG A., though components such as brakes and suspension were developments of the earlier 1955 MGA with its BMC B Series engine increased in capacity from the 1622cc of the final MGAs to 1798cc. The lightweight design reduced manufacturing costs while adding to overall vehicle strength. and the MGB was one of the first cars to feature controlled crumple zones designed to protect the driver and passenger in a 30 mph (48 km/h) impact with an immovable barrier.

The Mk.II was introduced in 1967 with the Roadster now having the GT type rear axle, sycromesh was included as standard on all ratios and an Automatic Borg-Warner option was available, in addition to overdrive and Rostyle wheels

All Mark II cars have syncromesh on all gears and there was an Borg Warner Automatic transmission option. Rostyle wheels though the popular option was for wire wheel

From mid-1974 the chrome bumper was phased out, replaced to meet US impact regulatioons, instead of redesigning the cars nose, the bumpers were replaced by new, steel-reinforced black rubber front bumpers incorporating the grille area as well, giving a major restyling to the B's nose, and a matching rear bumper completed the change. The US regulations also meant that headlamps were now to low, so BMC took the cheap option of raising the cars suspension, this along with the heavier bumper,adversely affected handling. For the 1975 model year only, the front anti-roll bar was deleted as a cost-saving measure (though still available as an option). The damage done by the British Leyland response to US legislation was partially alleviated by revisions to the suspension geometry in 1977, when a rear anti-roll bar was made standard equipment on all models. US emissions regulations also reduced horsepower. .

Many thanks for a Supersonic